Looking Back at the Record-Breaking Year for Disasters

Most of us breathed a sigh of relief when we turned the page to a new year, as it seemed like every day of 2017 brought a record-breaking disaster that impacted large areas of the country and put millions of Americans in harm’s way.

In its year-end review, FEMA reports that 2017 was a historic year that included “unprecedented disasters that affected more than 25 million Americans (almost 8 percent of the U.S. population).” The agency supported 59 major disaster declarations, 16 emergency declarations and 62 Fire Management Assistance Grant declarations across more than 35 states, tribes, and territories.

It’s no surprise then that 2017 also turned out to be the costliest year on record for weather and climate-related disasters in the U.S. According to NOAA, losses exceeded $1 billion, with approximately $306 billion in total costs — a new annual record for the United States. Previously, the costliest year was 2005, with losses of $215 billion, in large part because of Hurricanes Katrina, Wilma, and Rita.

When 2017 was all said and done, the United States had been impacted by 16 unrelated billion-dollar disasters, including: 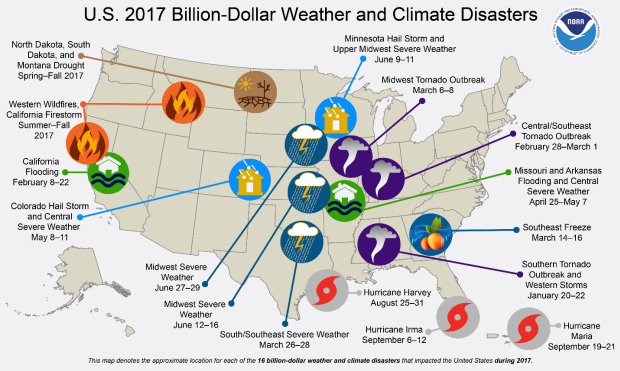 While both 2017 and 2016 each experienced a historically high number of billion-dollar disasters (16 and 15 events, respectively), year 2017 experienced a rare combination of:

2017 also created one of the busiest years for the National Flood Insurance Program (NFIP) to date — thus far, the NFIP has paid out over $8 billion dollars in flood insurance claims.

Here’s a look at the jaw-dropping stats of our historic year for disasters.

Historic Wildfires in the West

As if it couldn’t get any worse, 2017 was also a historic year for wildfires across the Western states, including two of the most devastating fires to ever impact California — the Tubbs wildfire in the Northern counties and the Thomas fire, which became the largest wildfire in modern California history.

FEMA and NWS provided real-time support for local and state authorities through Wireless Emergency Alerts (WEAs) to keep citizens informed of impending dangers. Regardless of the type of event, mass notification played a critical role before, during and following the year’s multiple disasters — underscoring the importance of having systems in place to respond quickly and effectively to a wide range of weather-related threats and natural disasters.

Clients of Regroup located in impacted areas had the tools to disseminate those critical alerts and updates to their network via all communication channels being leveraged during catastrophic events. This included messages sent via mobile app (SMS/text and push), social media, email, landlines, website portals, and more.

With a new year of seasonal events ahead of us, our team stands ready to help your company or organization weather any storms that 2018 may bring your way. As a client of Regroup, you can benefit from a wide array of tools and capabilities that strengthen operational resilience and can help save lives, including:

See for yourself how Regroup’s robust, yet user-friendly mass communications platform can help you keep the lines of communication open during catastrophic events. Give us a call at 1-855-REGROUP or email inquiries@regroup.com to schedule a customized demonstration of our award-winning system. Ensure your organization can weather the next storm with Regroup.