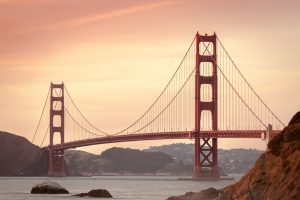 Those of us in the Bay Area started our Thursday a bit earlier than normal, when a 4.4 magnitude earthquake centered in Berkeley (on the Northern part of the Hayward fault) jolted us awake at 2:39 a.m.

But the East Bay earthquake wasn’t the only tremblor to shake the Bay Area yesterday. According to the USGS, a 2.5 quake also hit just west of Cupertino shortly after 3:30 a.m. The San Francisco Chronicle reports that the Bay Area “has been seismically active over the past several days. A cluster of about 30 earthquakes was recorded by the USGS in the last few days of December.”

Fortunately, at the time of this writing, there haven’t been any reported injuries or damage from yesterday’s quake. It did, however, remind us of the dangers we face in earthquake-prone California and the importance of having an earthquake early warning (EEW) system for the West Coast of the US.

The USGS, along with State and university partners, has been developing and testing an EEW system called ShakeAlert™. Its purpose “is to identify and characterize an earthquake a few seconds after it begins, calculate the likely intensity of ground shaking that will result, and deliver warnings to people and infrastructure in harm’s way.”

The USGS and its partners rolled-out the next-generation ShakeAlert™ early warning test system in February of 2016 in California and, in April 2017, Oregon and Washington came aboard. This West Coast-wide, next-generation system will not yet support public warnings but does allow selected early adopters to develop and deploy “pilot implementations” that take protective actions triggered by the ShakeAlert™ notifications.

On December 7, 2017, Regroup was approved to initiate pilot projects with our clients and the pilots can have any specific application. However, people who will receive alerts must be trained on how ShakeAlert™ works. The intent of the USGS is to allow pilot partners like Regroup to go live to the public at the end of 2018.

To find out more about Regroup’s work with ShakeAlert™ and how our mass communications platform can be leveraged to protect people, property and continuity of operations, give us a call at 1-855-REGROUP or drop us a line at inquiries@regroup.com. When seconds count, you can count on Regroup, the most trusted name in mass notification.